On a Roll with Bike Month

With just four days left in Bike Month, 10 All Star riders have logged a collective 1,625 miles and burned more than 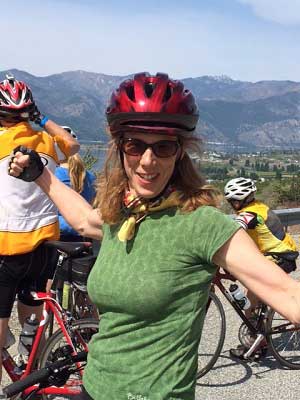 Every morning, riders converge on the All Star offices from points ranging from Sammamish to Beacon Hill, Lake City to West Seattle. We take a do-what-you-can approach: Some cyclists are in the saddle each day, some a few times a month, and others adjust their bike commutes to family schedules.

All Star has sponsored a Bike to Work team for at least eight years running. This time around, the company is offering $75 Amex gift certificates to the three new riders who suit up for the most days in May. “We as a company have a commitment to bettering the community,” says general counsel Dave Davis. “Our Bike to Work team sponsorship is an expression of that.” 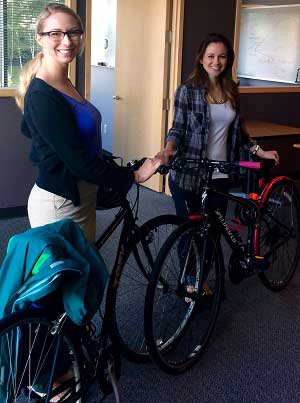 The team also provided the impetus for newer riders like Courtney Crooks to kick-start their bike commuting habit. “It’s something I’ve been wanting to do for a couple years,” says the sales account manager. “Getting advice and encouragement from everybody made it easier.”

Although she was a regular cyclist back in L.A., she hadn’t ventured out much in Seattle. The city’s congested traffic and hilly topography gave her pause, as did a chilly attitude from the greater biking community.

But, after 13 round trips from her home in Whittier Heights, she’s seen how the benefits of bike commuting outweigh the hassles. Chief among her reasons for riding? She no longer has to sit in a car, and the workout kills two birds with one stone. (No more driving to the gym.) She’s even found some empathy for aloof-seeming cyclists: “I get cranky on Seattle’s hills, too!”

Account manager Krystal Freitas is returning to the Bike to Work team for the second year. A self-described casual rider who values safety over speed, she didn’t join the team in hopes of winning a gift certificate. “It was moreso that I joined a team and wanted to contribute,” says Krystal.

What else keeps All Stars on their two-wheeled steeds?

“It’s been fantastic,” says team captain Scott Harrison of Bike Month. “Everyone is stepping up, and there are lots of new bikers. Compared to eight years ago, I’m really impressed by the amount of people biking in Seattle.”

Curious about bike commuting but haven’t taken the plunge? Ask any All Star cyclist for help in finding the bike lane to happiness.

← Lending a Hand: All Star Launches Employee Volunteer Program All Star on the Move →