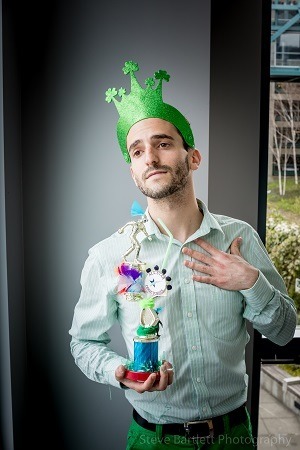 SEM strategist Benji Hill cut a lonely figure as he faced his opponent, Serge Bondar, in the final round of All Star’s 2015 air hockey tournament. Already crowned the victor of last year’s epic ping pong tournament, Benji was the player everyone loved to hate. “There was a backlash,” he says. The assembled onlookers, hopped up on sugar from the company St. Patrick’s Day celebration, were rooting for an upset.

“It was tough,” says Benji. “I had to play through the screams against me and the cheers for Serge.” Adding an extra layer of intensity to the match: Serge is Benji’s manager on the All Star SEM team.

It was a no-holds-barred matchup between the two SEM experts, but in the end, Benji took the game—and the tournament. His secret?  Training. Two months before the start of the games, he began playing air hockey every other day. He also credits his win to a lifelong history of playing ping-pong and tennis.

But Benji’s victory may be about more than hand-eye coordination. Drawn to sports because “there’s a quantifiable winner,” his determination to win the numbers game also shows up in his work life. “We [the SEM team] deal with numbers every day,” he says. “It’s a numbers-driven field, and we see proof of success and profit in the numbers.”

There were no cash prizes in the air hockey tournament, but Benji now has custody of an “exquisite” custom-made trophy in his cubicle. He also enjoyed a photo shoot with staff photographer Steve Bartlett, which set off a fresh round of taunting in the office. One anonymous frenemy created a life size poster of Benji with the trophy and hung it above his desk, where it now dominates the SEM corner of the office. Another co-worker even uses the image as his desktop background. But Benji holds his head high amidst the constant antagonism.

In a team that likes to work hard and play hard, there’s always something new around the corner. All Star will next host a pool tournament for the final contest on our 3-in-1 table (ping-pong, air hockey and pool). Looking to win the trifecta, Benji is already training at billiards venues all over Seattle and has a warning for his future opponents: “This isn’t over.”